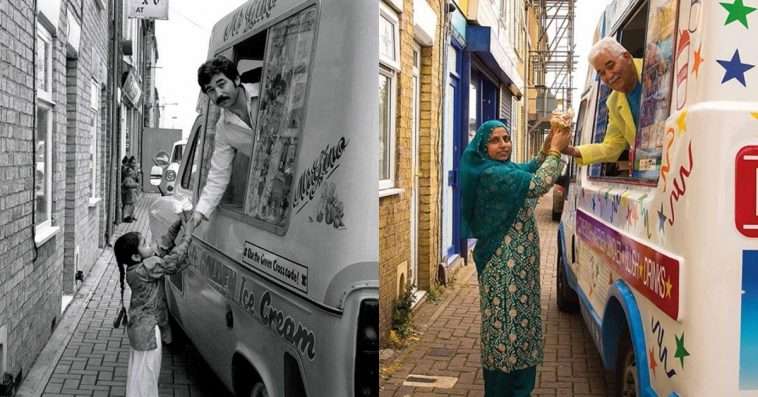 A photographer’s job is both rewarding and challenging. You contribute to the collective history by chronicling the globe and its inhabitants. Photography is a significant thing, even if you don’t think so. The ability to capture images in a exact and up-close way is a gift.
Chris Porsz, a British photographer, appreciated the value of his images taken back in the day. So he made the great project “Reunions” that we previously featured on our website. Now he’s back with additional reunions, completing this entire endeavor. Chris tracked the individuals in his 1970s images.

Surprise, he was able to contact folks he photographed 40 years ago! Bringing these folks back together, this fantastic photographer reproduced the situations they first met as closely as possible. Even though the individuals aged, their looks, tales, and feelings remained the same.

In this piece, the photographer recreated history at two points in time. It’s good to witness creations tied by time, emotions, and tales that renew.

In 1991, Emily Wright (née Adams) and Jimmy Adams sat in the doorway of the Madhouse store on Bridge Street in Peterborough. Emily and Jimmy grew raised in Werrington Village and went to The King’s School in Peterborough.

Gloria Steele adored her lollipop lady job at Queen’s Drive School on Dogsthorpe Road. She walked the kids three times a day for seven years in the 1980s. Gloria, who has two children, worked for the NHS as a community caretaker until she retired.
“It was wonderful fun recreating the shot in uniform with a fresh lollipop pole and keeping my touch while the vehicles kept stopping. We had fun and enjoyed seeing the girls mature.”

Paul Smith, 1980, Cobden Street, Peterborough, facing a Ford Cortina From 1978, he worked as a porter at Peterborough District Hospital, with Chris Porsz. A neighbor’s automobile appeared in the shot, he claimed. Paul is married with two kids and a DJ at Peterborough Community Radio. Unable to locate another red Cortina, Chris was approached by a friend who had seen one on a drive. Maurice and Joan Bradford provided a Ford Cortina Mk 5 Crusader for the reunion show. “I requested Paul to dress brightly to bring the old mono photo to life, and he didn’t disappoint!” Chris continued.

Mohammed Mustafa was about four years old when observed behind his home’s wall in 1982. He e has five kids and works at Tesco in Peterborough, and that’s still his mother’s home.
“It was great to see how he now towered over that wall and to be able to stop and converse about those intervening years,” Chris added.

Andy Ireland, a former physiotherapist to Sir Andy Murray, is currently a specialist at a clinic in central London.