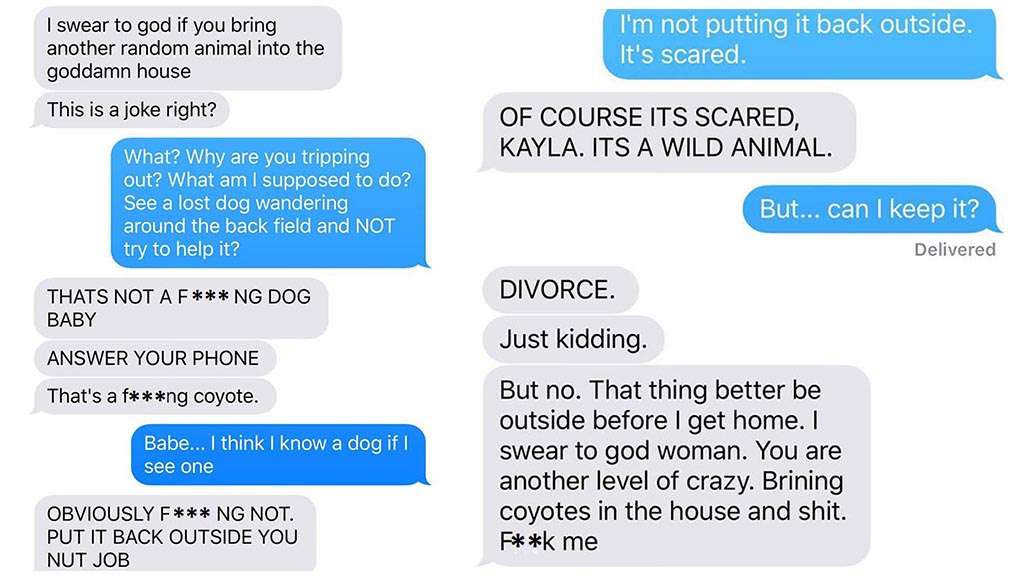 Instead of buying pets, rescuing and adopting pets are very popular these days. It is a good thing, and no one can’t resist their sad-eyed faces when we look at them. Even a stone-hearted person’s heart can be melted. Puppies are the most popular among these pets. Still, before starting to melt our hearts, you must confirm that it is indeed a dog sometimes, it can have a cute look, but also it can be a coyote. Coyotes have a similar look to dogs and are smaller than wolves, but they are dangerous. So, make sure to double-check without doing something like this person’s wife, Kayla, did.

Cities have gotten bigger over the past few years. Because of that, coyotes lost their habitats. Then they started to cross near houses often. Coyotes usually fear humans. However, some people mistakenly feed them, causing them to lose fear for us. Coyotes dogs usually attacked kids, and also few incidences were reported earlier.

So, Kayla Eby is Justin Bough’s wife. One day Justin, received a message from Kayla, and it was a picture of a ‘cute little dog’ she ‘found’ outside and it sitting next to their kid. When Justin looked at the image closely, he lost his nerve. It’s not a dog. It’s a baby coyote. Justin’s reaction was priceless, and he even said divorced too.

Fortunately, it was just a prank done by Kayla. Kayla is a funny wife to Justin, and she is a preschool teacher from Seaside, Oregon. She created that coyote photo in photoshop to prank her husband. Now their conversation is going viral through the internet like a storm. Check below to read the entire conversation of Kayla’s coyote prank.