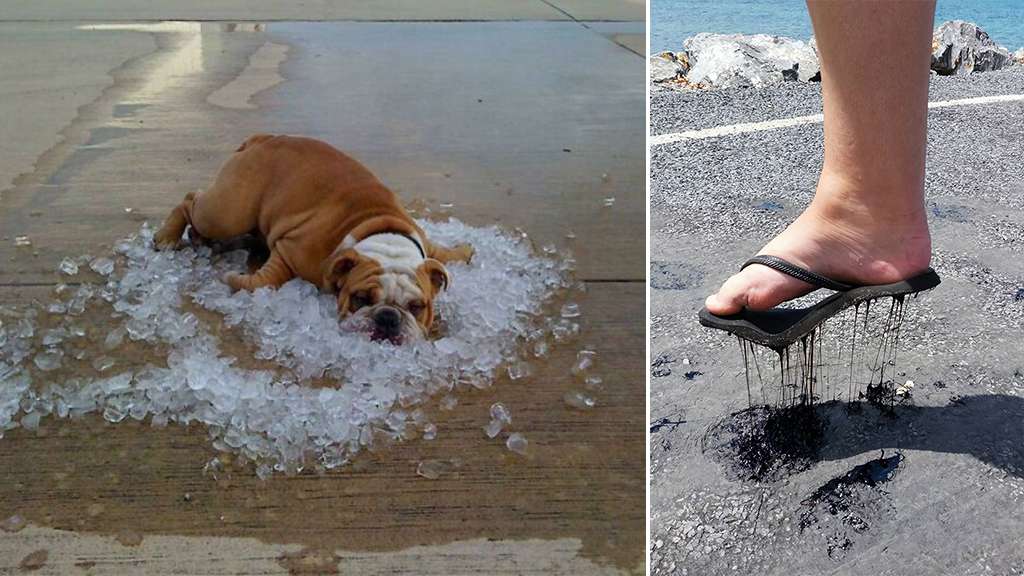 World Weather Attribution effort scientists evaluated the late-June heatwave in the United States’ Pacific Northwest. According to the team, they came to the tentative conclusion that it was an occurrence occurring around once every 1,000 years.

Roads have twisted, electricity wires have melted, and heat warnings have been issued for 50 million people throughout North America due to the harsh weather.

However, other continents are also suffering. For example, in Europe, a major forest fire has engulfed Greece for the seventh day in a row.

Pictures, on the other hand, frequently speak louder than words.

#1 Because it is pretty hot in Turkey, the shop owner let the kittens sleep in the freezer

Even though extreme heat may not seem as spectacular as hurricanes or floods, the National Weather Service has determined that it is the deadliest weather occurrence in the United States on average during the previous 30 years. And by a long shot.

Indeed, a heatwave in one state may not be a heatwave in another. The term is commonly used about local meteorological conditions. with temperatures consistently in the 90th to 95th percentile of the average in a specific location. As a result, the risk of a heatwave in Tucson is more significant than in Seattle.

#3 In Arizona, a man did not want his dog’s paws to get burned, so he placed him in a cooler

#4 How We Stay Cool In Australia’s Summer Heat. On a warm stomach, an ice-cold can is refreshing

A cap or a heat dome is formed by sinking air, which holds the latent heat previously absorbed by the terrain. In addition, the high-pressure system pushes out colder, faster-moving air currents and squeezes clouds away, allowing the sun to have an unobstructed line of sight to the earth.

In this case, the ground (including soil and sand and concrete and asphalt) is free to bake. During the summer, long days and short nights, heat energy rapidly builds, and temperatures soar.

#6 Because it was a scorching day, this little fellow decided to lick the condensation from my beverage.

#7 When it’s 100 degrees outside, giving water to a dehydrated bunny is difficult.

#8 A security guard in Egypt, decided to cover the dog’s paws to keep him safe from the scorching pavement

#9 Nature Under the Shadow of Technological Advancement

#10 Because of the extreme heat (40 degrees Celsius), my local convenience store allowed a stray dog to come in to cool off

#13 A farmer takes a few pigs swimming in the river, during a heatwave in the Netherlands

#14 On a scorching day, a moose seeks water

#15 After 40 degrees Celsius of heat, it finally started to rain

#16 It’s getting a little hot in Australia right now

#17 It’s scorching hot here in Australia right now, and I was perplexed as to why the birds weren’t making use of our birdbath

#18 Stay Cool in the Summer

#19 My Cassette Adapter was left in the car in the scorching sun. As a result, the Hottest Mixtape of the Year has been released

#22 Because of the heat waves in Belgium, hedgehogs are having difficulty finding food, leading them to wander into gardens

#23 I saw this gentleman in Paris, France, assisting his canine companion in cooling down during the 40°C heatwaves

#24 Because it is so hot here in California, this gas station has placed covers over the door handles to prevent anybody from getting their hands burned

#26 Because of the extreme heat in the United Kingdom, these cans exploded in the vending machine

#28 In Korea, it was boiling today

#29 When the temperature rises above 90 degrees, you know it’s hot

#30 My father booked a trip to Canada after telling us that he was tired of the Florida heat and wanted to get away. This morning, as I look out my balcony window, I see him walking around like this